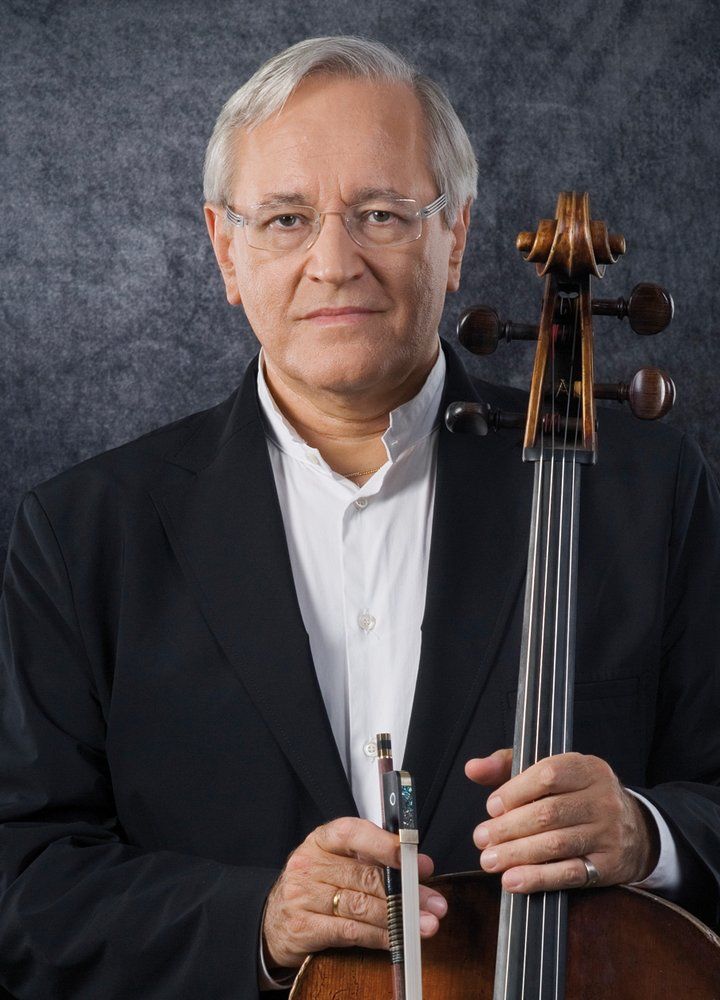 The Lithuanian cellist and conductor David Geringas belongs to the musical elite of today. An unusually broad repertoire from the early Baroque to the contemporary is testament to the flexibility and curiosity of the artist. His intellectual rigor, his stylistic versatility, his melodic feeling, and the sensuousness of his tone have brought him praise the world over. The Rostropovich pupil and gold-medal winner of the 1970 Tchaikovsky Competition can now look back on a career that has spanned decades.

David Geringas has been awarded in the years 2013 and 2014 with the “Echo Klassik”. In 2013 he received the award for best chamber music recording of the 20th/21st Century (Braunfels/Strauss, Profil Edition Günter Hänssler) and in 2014 for the best chamber music recording of the 19th century (“Pohádka”, C2 Hamburg / ES DUR). Prominent in his career as an artist are the regular releases of outstanding CDs. Between 2008 and 2011, eight new CDs were released. Among them are two world-premieres (“David’s Song” and “Discorsi”, Profil Edition Günter Hänssler ), the works for piano and cello by Sergei Rachmaninoff (Hänssler Classics), of Felix Mendelssohn-Bartholdy (Profil Edition Günter Hänssler) and Frederic Chopin (Sony Music Entertainment, as well as the complete works Violoncello and Piano by Ludwig van Beethoven (Hänssler Classic) with the pianist Ian Fountain – a recording that has been awarded the “Editor’s Choice” by GRAMOPHONE. The CD of the cycle “Bach Plus” that includes all the six Bach Suites for violoncello, introduced with fragments from various contemporary composers was released in October 2011 and was hailed by the critic.

Well-known contemporary composers such as Sofia Gubaidulina, Ned Rorem, Peteris Vasks and Erkki-Sven Tür have dedicated cello concertos to him. He has premiered many works of the Russian and Lithuanian avant-garde in the West. In 2002, he gave the world premiere of the Concerto in DO by Anatolijus Senderovas which was dedicated to him, and won the European Composers Prize in Berlin. In 2012, David Geringas performed three world premieres, Arvydas Malcys’ Concerto “In Memoriam” in Kaunas, the Concerto per Violoncello by Silvia Colasanti in Milan, and the Cello Concerto by Alexander Raskatov in Amsterdam.

As conductor, David Geringas appears regularly in Germany and abroad, and appears frequently in a dual role as cellist and conductor. Besides the invitations from the citadels of West and East European music centers (Amsterdam Concertgebouw, Auditoriun Parco della musica Roma, Wiener Musikverein, Tonhalle Zürich, Berliner Philharmonie), among others, he has received invitations from Asia and the USA. From 2005 to 2008, he was chief guest conductor for the Kyushu Philharmonic Orchestra and in 2007 he had his debut at the Tokyo Philharmonic Orchestra und the China Philharmonic Orchestra. In February 2009, he made his debut as conductor with the Moscow Philharmonic in Moscow and in 2015 with the Mariinsky Theater Orchestra in St. Petersburg. His opera conducting debut followed in 2010 with Tchaikovsky’s Eugene Onegin in Klaipeda, Lithuania. In 2015 David Geringas gave a successful debut as a musical director and conductor of the ballet “Egle , the Queen of Grass Snakes “ by Eduardas Balsys in Vilnius.

Lithuanian music and composers, David Geringas has won the highest awards of his homeland. He was awarded the Verdienstkreuz 1. Klasse of Germany for his achievements as musician and cultural ambassador for the country on the international musical scene.