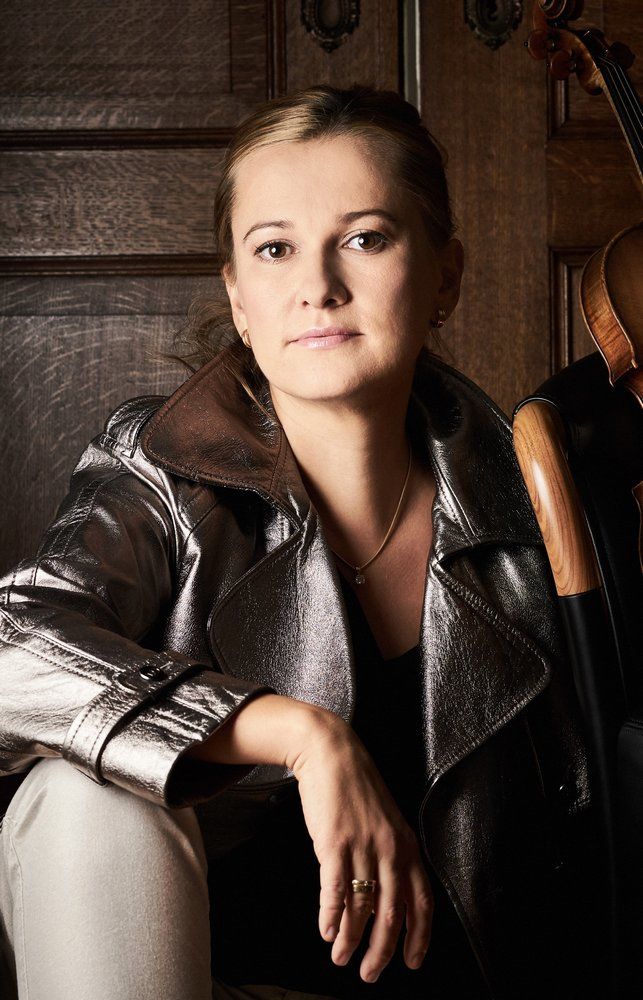 Maria Solozobova is one of the most renowned violinists of her generation. Her dazzling career has already taken her to the world’s finest concert halls including the Tonhalle Zurich, the Stadtcasino Basel, Victoria Hall in Geneva, the Berliner Philharmonie, the Koelner Philharmonie, the Great Hall at the Tchaikovsky Conservatory in Moscow, the Konzerthaus in Vienna and Ljubljana’s Philharmonic Hall. Solozobova has played under many famous conductors such as Vladimir Spivakov, David Zinman, Vladimir Fedoseyev, Vladimir Jurowski, Daniel Raiskin, Muhai Tang, Peter Csaba, Howard Griffiths and Michael Hofstetter. She is a frequent guest, both as a soloist and a chamber musician, at the most prestigious festivals in the world. Solozobova’s performances today include appearances with leading orchestras and musicians worldwide including as Martha Argerich, Mischa Maisky, Yuri Bashmet, Maria Joao Pires, Vladimir Ashkenazy, Sol Gabetta and Mikhail Pletnev.

Maria Solozobova was born in Moscow and now lives in Switzerland. Her exceptional musical talent was evident even as a child and at the age of ten she won first prize in Russia’s most prestigious national music competition. After attending Moscow’s Gnessin School of Music for gifted children, she continued her studies at the famous Tchaikovsky Conservatory in Moscow (concert diploma degree with honours) and with Professor Zakhar Bron at Zurich University of Music and Drama. She completed her studies with Professor Raphael Oleg at the Basel Music Academy (soloist diploma degree with honours).

Solozobova was appointed leader of the Orchestre de la Suisse Romande even before completing her studies. She has won several prestigious international music competitions, for instance the Johannes Brahms Competition in Austria (first prize and special audience price 2000), the W. A. Mozart Competition in Zurich (first prize 2005), the Tibor Varga Competition (2009) and the Rodolfo Lipizer Prize.

In 2007 her debut CD, on the Antes label (Bella Musica Edition) with works by Peter Tchaikovsky and Heinrich Wilhelm Ernst, was enthusiastically received by the international press. This was followed in 2011 by a recording of selected works by Joseph Haydn, Johann Sebastian Bach and Antonio Vivaldi. „Her modern style will certainly appeal to future generations too,“ observed the Neue Zürcher Zeitung. 2013 sees the release of „Paganini“, Solozobova’s new Bella Musica CD, on which she plays Niccolò Paganini’s Violin Concerto No. 1 and the „Nel cor piu non mi sento“ variations for solo violin with the Cape Philharmonic Orchestra.

In 2016 Maria Solozobova discovered the Romantic violin concertos of Paul Juon and Hans Huber, performing them for the first time with the Collegium Musicum Basel under the direction of Kevin Griffiths and recorded them on CD for Sony Classical (2017)

In 2009 Maria Solozobova founded as artistic director the «Classical Highlights» Zurich, an annual international series of four concerts in distinguished concert halls in Switzerland. As part of a broader program encompassing artists and writers, this offers a dynamic meeting point for outstanding orchestras and the most distinguished young soloists and conductors from Russia, Germany and Switzerland.

Maria Solozobova’s playing is an enthralling combination of virtuosic power, creative spontaneity, beautiful tonal warmth, elegance and musical insight. Her repertoire covers the whole spectrum from baroque works through classical and romantic music to contemporary compositions. Next season she will be performing in several European countries and South Africa. Maria Solozobova plays an Italian violin by Nicolo Gagliano (1728). Solozobova has taught at the University of Music Lausanne since 2015.

"… A wonderful talent with a lively temperament, virtuosic brilliance and a very high professional level …"