The First Round of the Cello Competition within Classic Strings 2022 has come to a close, and a list of 18 successful participants who have made it to the Second Round has been released by the jury board. 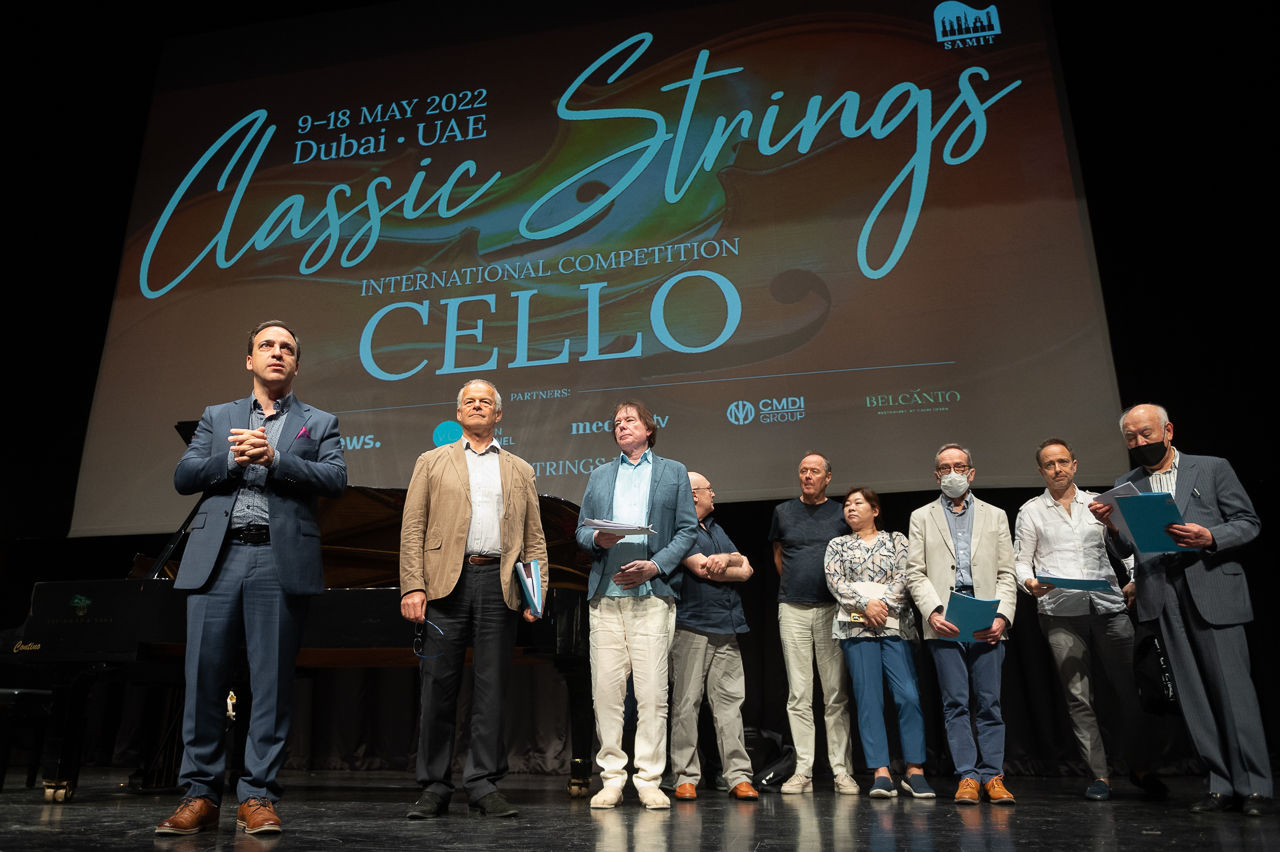 On Friday 13th May, the first phase of the Cello Competition, taking place at the Theatre at the Mall of the Emirates as part of the 2022 Classic Strings International Competition, came to a conclusion.

Having commenced on the 9th of May, this round saw 70 participants taking to the stage to perform in front of a jury panel stacked with some of the biggest names in the cello world, including Chairman Dominique de Williencourt (France), Boris Andrianov (USA), Suren Bagratuni (USA), Alexander Chaushian (Armenia/UK), Henri Demarquette (France), Julian Lloyd Webber (UK), Philippe Muller (France), Martti Rousi (Finland), Meehae Ryo (South Korea) and Tsuyoshi Tsutsumi (Japan).

After listening to the last set of competitors on the morning of the 13th, the jury retreated to discuss all the performances among themselves, and emerged a few hours later with a list of 18 candidates who they felt deserved to book a place in the Second Round. These candidates, listed in alphabetical order by surname are:

Following the press conference which saw the names of the successful candidates being announced, the jury board remained behind to speak to all the participants of the competition, and provide feedback and advice on their performances, with many members of the panel commenting on how high the standard within this year’s competition has been. Jury Chairman Dominique de Williencourt, for instance, noted that, “I am speaking for all my colleagues in the jury when I tell you that we were all impressed with the very high level of talent we saw. The fact that 18 candidates made it through shows actually how high the quality has been! It’s a very high level competition, and a very international competition with more than 20 nationalities represented in the First Round I believe, which is very good because this competition is a very important initiative for education, for the future of the cello, and for these young musicians coming from all over the world. I’m very proud to be the Chairman of the jury board for this competition, and I’m now very excited to see what these participants will be doing in the Second Round; everyone’s worked so hard so far, and performed some very difficult pieces so I’m looking forward to seeing what’s to come”.

The Second Round of the Cello Competition, which will commence on the 15th of May, will require participants to perform a sonata from a pre-selected list of composers, including F. Schubert (“Arpeggione”), C. Debussy, L. V. Beethoven (Sonata No. 3 or No. 4), S. Prokofiev, J. Brahms (Sonata in F-Major), D. Shostakovich, R. Strauss and S. Rachmaninov, as well as an additional composition of their choice. As in the case of the First Round, the second phase of the competition shall also be taking place at the Theatre at the Mall of the Emirates, with the Final Round then scheduled to be held at the Music Hall of the Jumeirah Zabeel Saray hotel.

Meanwhile, the Violin Competition within Classic Strings, which had been on a one-day break, will be returning on Saturday 14th May at the Auditorium of the Dubai Knowledge Park to continue proceedings with its own First Round.

Organised by SAMIT Event Group, the Classic Strings International Competition, which is graciously supported by The Violin Channel, is hosting two simultaneous competitions in violin and cello between the 8th to the 23rd of May. This project forms part of the events of the 2022 InClassica International Music Festival, about which more information can be found on the official website here.