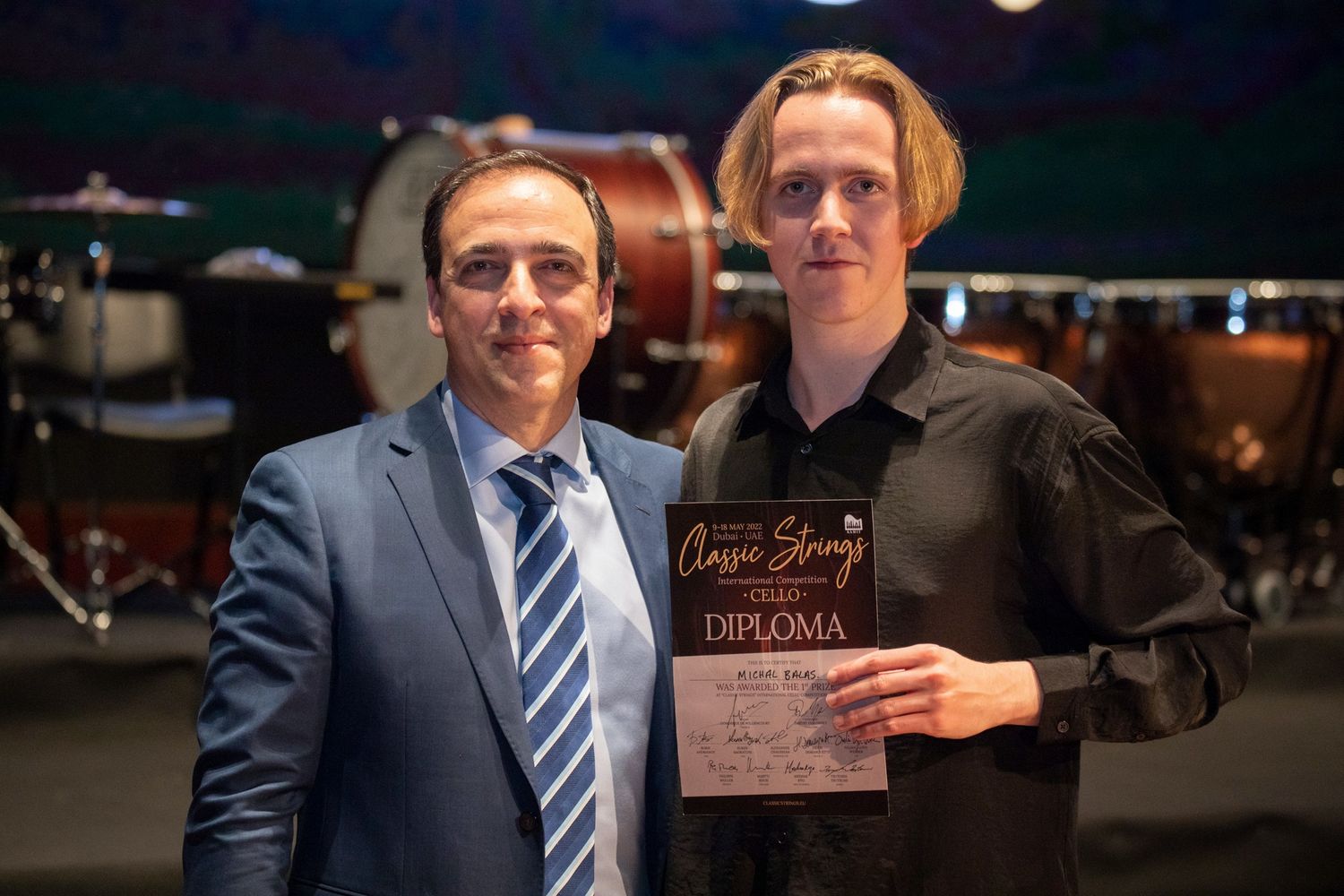 The Cello Competition within Classic Strings 2022 has officially come to an end, and the list of final standings has been revealed, with Michal Balas named as the winner, Sydney Lee coming in second place, and Vaclav Petr rounding out the top three.

After a ten-day journey over three hotly contested rounds, the Final Round of the 2022 Classic Strings’ International Competition, which is organised by SAMIT Event Group, has drawn to a close, with the jury board announcing the official standings of each of the eight finalists.

Throughout this two-day phase, contestants were asked to present one cello concert from a list which included R. Schumann, A. Dvorak, J. Haydn (Concerto in D-Major), D. Shostakovich (Concerto No.1),  P. I. Tchaikovsky (Rococo, W. Fitzenhagen version), E. Elgar, E. Lalo, S. Prokofiev (Sinfonia Concertante), and C. Saint-Saens, as well as Composer-in-Residence Alexey Shor’s Musical Pilgrimage. Each work saw the candidates performing alongside the Armenian State Symphony Orchestra, which has taken on the role of Orchestra-in-Residence for this edition of Classic Strings, under the baton of the celebrated conductor Dmitry Yablonsky.

Both days of the Final Round were streamed live on YouTube, and on the website of The Violin Channel, who are the event’s official media partners.

Following the conclusion of the last finalist’s performance, the jury board, which is chaired by Dominique de Williencourt (France), and comprised of Boris Andrianov (USA), Suren Bagratuni (USA), Alexander Chaushian (Armenia/UK), Henri Demarquette (France), Julian Lloyd Webber (UK), Philippe Muller (France), Martti Rousi (Finland), Meehae Ryo (South Korea) and Tsuyoshi Tsutsumi (Japan), withdrew to draw up the final standings, and emerged shortly after to announce the list of prize-winners in all of the competition’s categories.

The official standings are as follows:

As First Prize winner, Michal Balas has won an award worth €100,000, consisting of a €50,000 cash prize, and a tour of 10 concerts with an honorarium of €50,00o per concert. Sydney Lee, meanwhile, has received €30,000 for achieving second place, while Vaclav Petr has been awarded €15,000 for ranking third. The remainder of the finalists, namely Liav Kerbel (Belgium/Israel), Johannes Gray (USA/France), Alexey Zhilin (Russia), Yung-Tzu Wang (Taiwan/Germany), and Lizi Ramishvili (Georgia), each received a Special Finalist Prize of €1,000 in recognition of their achievement in making it to the Final Round.

Speaking in the aftermath of the competition, juror Tsuyoshi Tsutsumi commented that “it’s such a great pleasure for me to be at this competition. There are such wonderful, great talents; I think the future of the cello is very bright, and I have great hope for the future. The level was very high, and many of them are very accomplished already I feel. They are still young but nevertheless, I think they are wonderful artists already and for me it’s a really wonderful occasion to be here and to hear them, and I hope that if there’s anything I can do for them for the future they will ask because it would be an honour for me.”

The culmination of the Cello Competition, however, does not mark the end of Classic Strings 2022, since the event’s Violin Competition is still in progress, with its Second Round getting underway on Wednesday 18th May at the Auditorium of the Dubai Knowledge Park.

The Violin Competition’s Second Round shall continue for a further two days, with jurors announcing the list of finalists on the 20th of May. Its Final Round then, will take place from the 21st to the 23rd of the month at the Music Hall of the 5-star Jumeirah Zabeel Saray hotel.

“It’s quite an unequal group of performers but with very high and very interesting candidates”, juror Michael Guttman remarked, “and of course the level is now getting higher and higher by the day! There are some fantastically strong candidates, very strong. There were also some kesser candidates who are not really ready for this kind of competition, but it is still good experience for them to be playing in front of the jury, and overall we can already say that we’ve discovered some very interesting talents and that’s the main idea for any competition ultimately”.